skip to main | skip to sidebar

Monsoonal rain in Phuket meant there wasn't much work we could do on Malaika, and we were going down with cabin fever badly, so we decided to visit Chiang Mai in the north of Thailand. We'd planned to go to Angkor Wat in Cambodia, but the terrible cyclones devastating the Philippines were dumping a lot of rain to the west so we decided to leave the temples for a drier time. 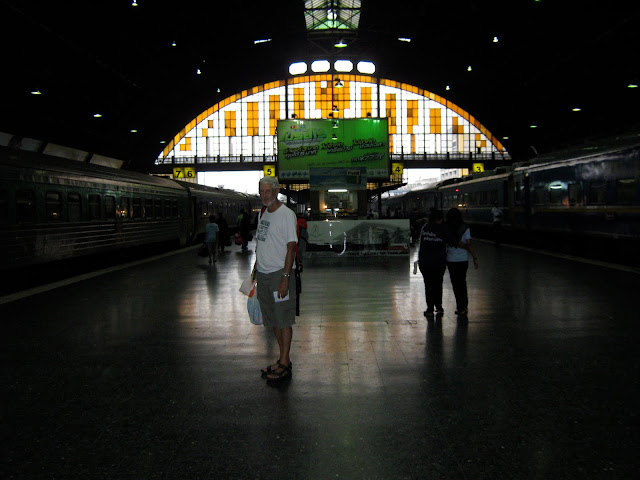 Lex at Bangkok Railway Station - this looks a lot like Platform 9 and 3/4 - is this the train to Hogwarts' sir?


Train travel sounded like a romantic way to get there, so we flew to Bangkok, and boarded in the early evening. We were surprised to find we had a first class cabin and not the carriage of double decker bunks as we'd thought. We may have had a first class cabin, but it wasn't the Orient Express. Our bunks were right over the rolling stock, noisy and bumpy, but it was fun travelling by train again, something I used to do a lot as a kid with far-flung relatives. 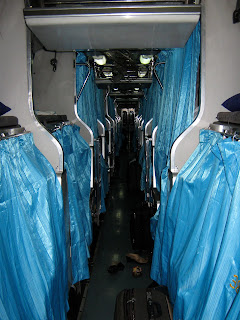 This was the coach we'd thought we were in. You'd want to remember which blue curtain was yours if you went off to the loo in the middle of the night!


We arrived about 9am, took a taxi into town to a backpacker hostel we picked out of Lonely Planet, and then went for a walk to get oriented. The old city is interesting, packed with beautiful Buddhist temples and surrounded on four sides by a wide moat. Narrow winding lanes hide some great little restaurants, and eclectic places to stay. There are a lot of markets, in particular the Saturday and Sunday walking markets, where it seems the whole town turns out to wander the blocked off roads, buy stuff, and eat on the street - Mindil Beach markets on steroids. Hundreds and hundreds of stalls selling everything you can think of, (even some really good stuff!) as well as all kinds of food imaginable. I think my favourite sights were the wanna-be boy bands busking in the middle of the streets, and looking like they were having more fun than anyone.

The vendors don't hassle you either, if you don't want to buy anything, and the bargaining is very good natured. Lex made me haggle for something I wanted to buy, and the vendor made his wife take the other side (she looked as if she enjoyed haggling about as much as I do). The two men were laughing the whole way through. The wife and I just shrugged at each other. And I'm quite sure I still paid too much! We also stopped at an interesting looking bar, called 'The Writers Place', for a glass of wine, where we met an elderly ex-pat American woman writer, whose books were in the glass case next to the bar. We guess she must have been there a long time. We were joined at the bar by a couple of lively Scottish women then, who'd just flown in from Sydney and Lyons respectively to meet up and celebrate their 40th birthdays. They were as entertaining as Scots in a bar usually are, and we barely got away with our livers intact. 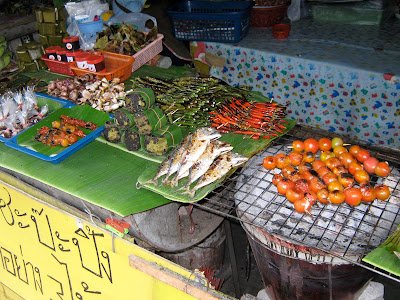 We spent the next few days sightseeing, including a day long tour - courtesy of a lady we met at a market - by tuk-tuk up the hills to the elephant 'sanctuary', and a similar tiger establishment. Lots of human interaction with animals at both, which, although I had reservations about what I was going to see, wasn't as terrible as I thought. 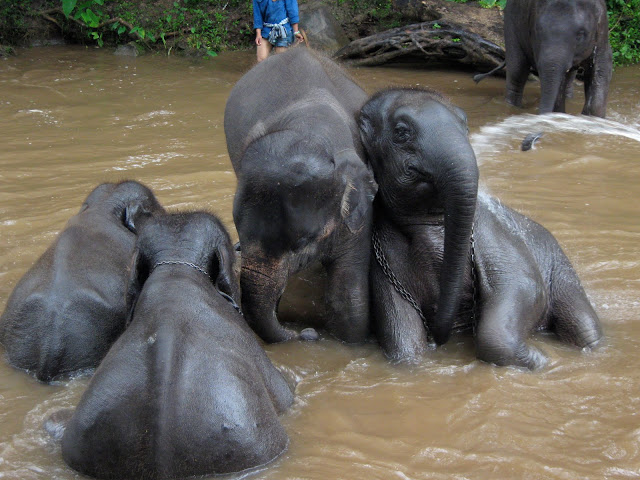 The elephants playing soccer looked like they were thoroughly enjoying themselves, especially when they kicked the giant - muddy - soccer balls into the audience occasionally. They also painted pictures - quite an astonishing thing to see. Even if you assume that the mahouts have a certain control or influence over what happens, it's still remarkable.  Like that Gary Larsen cartoon with the piano playing elephant says: 'I'm a pachyderm for pete's sake...' 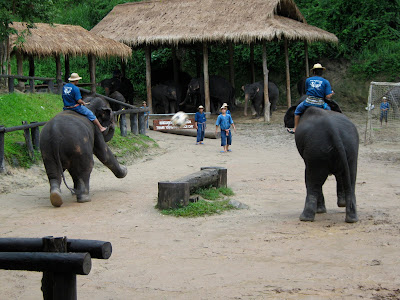 Put THAT in your pipe, Beckham! 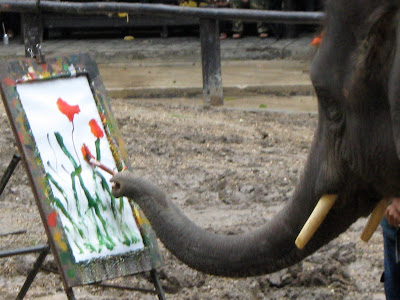 The paint-wielding elephants have to be seen to be believed.  There's obviously a great deal of training involved, but even so...  Just amazing, and very thought provoking. 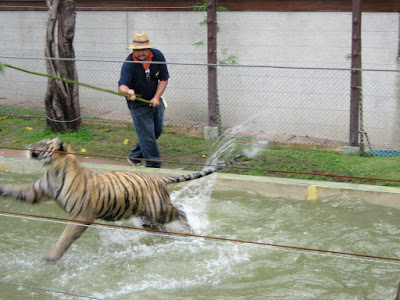 The tigers were better than expected too, especially seeing these fearsome beasts romping around a swimming pool chasing a tuft of grass on a string flicked about by an attendant right there in the pen with them. They're completely hand reared - no one was pretending these are wild animals -  and the money that people pay to be able to spend 20 minutes sitting with a full grown Bengal tiger, patting it and tickling its belly, or cuddling a cub, pays for the care of these animals and towards conservation in other areas. Ditto with the elephants. Although I still won't ride on one. I just hate the idea of humans wobbling about on the backs of such wonderful creatures for fun. (And yes, horses are totally different!) Understanding how horses actually enjoy exercises like dressage, and learning routines, makes it easy to assume that elephants, who are probably more intelligent than horses, get the same enjoyment out of what they learn in these places. It would be better if we could just observe animals in the wild but that's getting less and less realistic every year. These ones are alive and safe, at any rate. 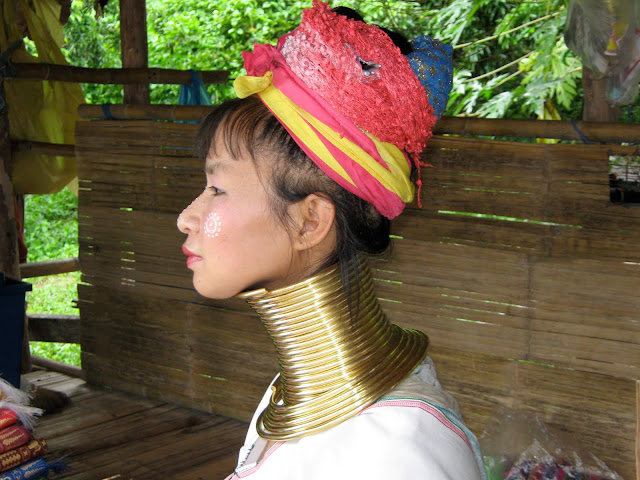 A visit to a 'traditional' hill tribe village is what you do in Chiang Mai. Obviously it's not a real one as it's in Chiang Mai and not the hills, but it's an effort by the government to resettle Karen refugees from the border areas and provide them with employment. The village we visited is an organic farm, and the women weave and sell handicrafts, notably beautiful scarves and wraps. 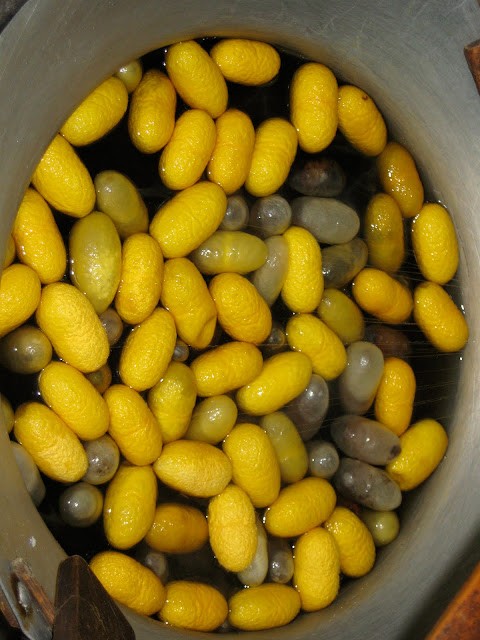 We also visited a silk factory, which was fascinating, and I'd like to be able to say we didn't succumb to the shop out front, but I'd be lying. The weaving process is mechanised now but there was a woman patiently hand harvesting and spinning the silk thread, showing exactly how it comes off the cocoons. It's amazingly strong - no wonder they used to make parachutes out of it. 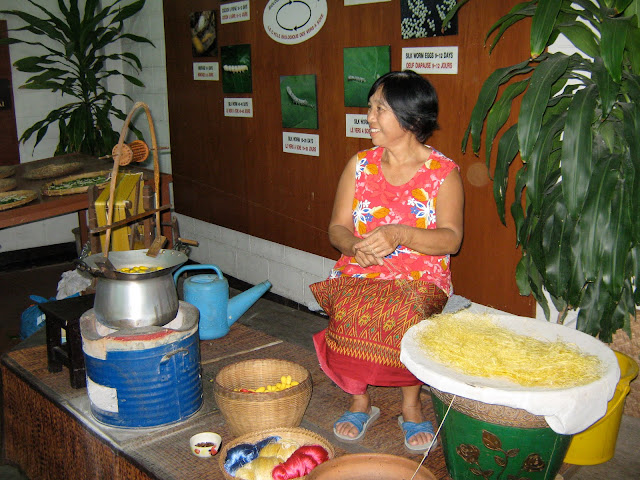 Chiang Mai is lovely, a lot more attractive than Phuket in most ways, except it's not on the sea of course. It's a bit cooler here as well, and prices are a lot cheaper than in Phuket. Our hostel, Tri Gong, in the Old City, is great and only about $18 per night for a comfortable room with bathroom. You can do it a lot more cheaply still but you get what you pay for I think. We relied on Lonely Planet and it pays off, we've discovered, and it doesn't hurt that all the Thais we meet are very helpful in recommending places to stay or eat -and not just their cousin or brother's either!

It's definitely a place we would like to spend more time.

After years of scanning yacht websites and buying truckloads of Trade A Boat magazines, we found Malaika in Scarborough Marina, QLD, in 2007. We sailed her back to Darwin in July of that year, taking a month to cruise the east and north coasts on the way home.
She is a 14.5 metre centre cockpit cutter, designed by Alan Wright of NZ, and built of solid fiberglass in 1987 by Goodwin/Salthouse in New Zealand. She draws 1.8 metres, and sails very upright. Her cockpit is spacious and comfortable, and the hard dodger and bimini overhead keep everyone well sheltered in all conditions. She has a PUR Watermaker on board, with a capacity of 80 gallons per day, and a motoring range of about 600nm. Her engine is a 110hp Volvo, and we installed a 4.5kvo genset for charging batteries and running the refrigeration.
We use a Raymarine chart plotter, sounder and radar, and pc- backed up navigation systems.
Communications – HF and VHF radio, Sailmail, and mobile phones when in range using local sim cards has worked well for us so far.
Malaika means ‘Angel’ in Swahili, and we discovered that in Bahasa Indonesian, adding a ‘T’ to the end of it also means Angel!

Home for the next year or so...

Joanne van Os
Darwin, Northern Territory, Australia
Lex Silvester and Jo van Os are leaving Darwin and heading east, but with no clear idea of where exactly we're headed, other than east to Cape York, and turn right. Probably... We're in our new boat, "Tramontana", a 54 ft Atkinson monohull, which we found in Phuket last year. Our old Malaika blog is still on the web, at www.malaikacrew,blogspot.com.